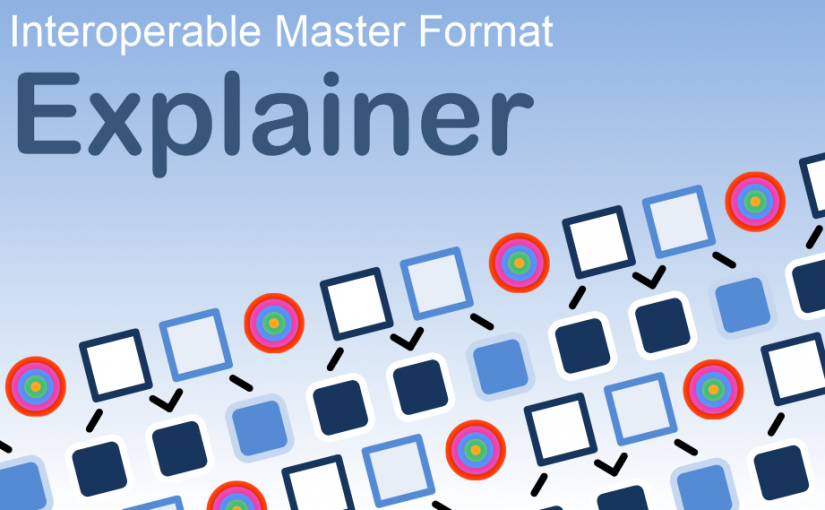 IMF is a file-based media format that simplifies the delivery and storage of audio-visual masters intended for multiple territories and platforms. It is particularly well-adapted for delivery to today’s global content platforms.

IMF is an international standard actively managed by SMPTE. It is extensible, uses proven technologies and benefits from many open source and commercial implementations.

Today, each audio-visual title is routinely offered in many versions, each combining:

Such a large number of versions cannot be efficiently tackled by the legacy practice of delivering each version as a separate linear audio-visual master, e.g., as a multiplexed QuickTime file or on tape.

How does IMF work?

In IMF, an audio-visual master is split into its component parts, as illustrated below.

Each Track File contains a single kind of audio-visual essence corresponding to a single aspect of the presentation. For example, a first Track File might contain the primary video essence while a second might contain the French audio essence and a third the English captions. Track Files use a simplified flavor of the MXF file format.

The combination of a Composition Playlist and the Track Files it references is called a Composition and corresponds to a single audio-visual master.

The primary benefit of this component-based approach is that a given Track File can be reused across multiple versions of a title, resulting in reduced mastering and delivery times, storage costs, quality control passes…

What are sample use cases for IMF?

What kinds of audio-visual essence does IMF support?

What are IMF core constraints, applications and plug-ins?

IMF is specified in the ST 2067 family of standards managed by SMPTE.

IMF is organized into a set of core constraints, to which all IMF implementations are expected to conform, and several applications, which target specific use cases, and plug-ins, which contain optional technology that can be used across multiple applications.

The objective is for the core constraints to represent the bulk of the IMF standard, with applications and plugin introducing minimal variations. So far, the primary distinction between applications has been in their choice of video codecs.

IMF can be readily extended with new kinds of audio-visual essence and metadata. Such extensions can be standard or user-specific. In fact, SMPTE continuously updates the IMF family of standards to match emerging use cases and fix bugs. Contribution and participation from the community is encouraged.

What are the current IMF applications?

How are IMF Compositions delivered or stored?

For delivery or storage, one or more IMF Compositions are combined into a Delivery. As illustrated below, a Delivery consists of multiple files, which can be stored on the network or on physical media.

The Asset Map provides a location of all the files included in the Delivery. These files are grouped into one or more logical packages (IMP). Each IMP can, for instance, correspond to a particular purchase order. The list of files that belong to an IMP are listed in a Packing List (PKL).

What are non-goals of IMF?